Tweet
Back to Talk Back to Escape Dean's Nightmare Report abuse 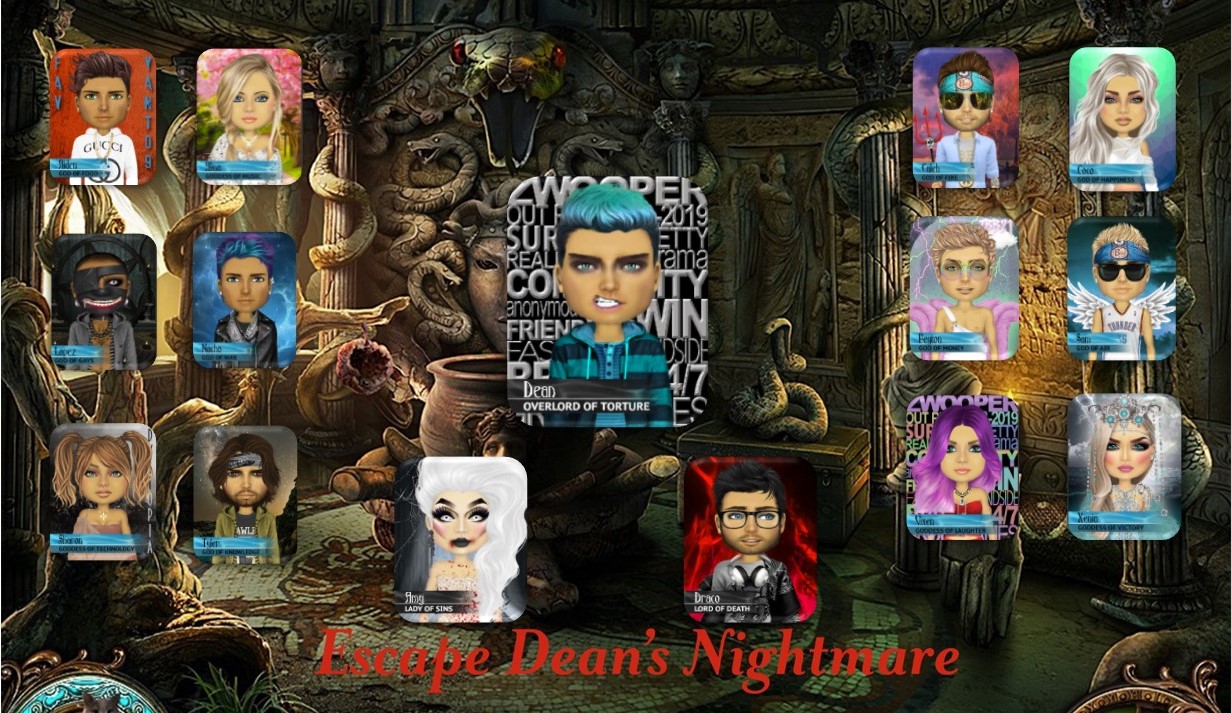 
EPISODE THREE
Everyone is shaken by the recent deaths, sent up camp on the newly cleansed siren beach. During the night they are kidnapped by an unknown force. They wake up locked into a candelit room. There is a dinning table in the middle of the room, and only one door, but it is locked. On the table is a note, and 10 chalices filled with strange liquids.

The note states that 1 chalice is poisoned, and 1 chalice contains a power to open the door, the remaining 8 are all safe to drink. The 10 reluctantly drink, and they approach the door one by one. Once AK steps to the door, it opens and they escape the room.

They agree to split up into pairs to try and escape the house. The pairs are:
Tyler & Sharon
Alina & Caleb
AK & Sam
Nacho & Xenia
Peyton & Vixen

Nacho & Xenia escape the house first, closely followed by Tyler carrying an unconcious Sharon, then a little while later Alina & Caleb make it out. After a few hours, AK & Sam and Peyton & Vixen were still trapped in the house. They are trapped by a dark force that lives in the house, if they can answer his riddle they can escape. Before she can answer, Vixen is affected by the cursed chalice and passes out, Sam and Peyton correctly answer the riddle, leaving AK & Vixen to fend for themselves.


EPISODE FOUR
Everyone heads back to camp, it is getting late and everyone wants to go to sleep, they decide to have a rotating guard every few hours. When they wake up in the morning, Sharon and Nacho have disappeared.

Everyone goes out to search for them, the find them up on the cliff where the Siren was defeated. They watch as Nacho stabs Sharon several times before shoving her to her death. As Nacho returns to the group, the dark figure emerges from the shadows.

It was the God of the Underworld, Hades. He congratulates them for eradicating the curse from the group, and says that he has selected the group for a mission, and if they succeed he will bring back a friend of choice. He asks them to choose 2 strong champions to kill Zeus. If they decline his mission, he will kill them all.

Xenia is chosen as the leader for the challenhge, and 2 people will be selected by vote to help her on the quest. Xenia gets to chose a player herself, and everyone else will vote. Xenia has chosen to bring Caleb and Tyler has been chosen by vote.

Hades hands Xenia the ring of death. The ring will temporarily protect her from death and has the power to kill Zeus, by shooting a flash directly to Zeus' heart. Xenia, Caleb & Tyler head to Olympus.

Xenia stands on a balcony and gets ready to kill Zeus. Caleb and Tyler attempt to get Zeus in position. Xenia shoots a death flash to Zeus, but Zeus responds by shooting a lighting bolt at Caleb. Both Zeus and Caleb fall to the ground, dead.

Lopez and Sharon battle eachother to return to the game, Sharon successfully beats Lopez and returns to the game. BUT Hades isn't finished. He orders Xenia to bring back Sharon from the Underworld. Xenia obliges. On their way out, Sharon and Xenia are caught by Artemis and Apollo.

Artemis and Apollo reveal that after Zeus died, Poseidon and Hades had a power struggle for the ruler of Olympus. Hades had killed Poseidon. Hera, Hestia and Demeter all attempted to stop Hades becoming ruler, but he easily overpowered all 3, and killed them all. Artemis and Apollo know that the players were involved in his death, and required to choose someone to recieve punishment as decided by the Goddesss Athena.

They players are asked to rank their fellow players in order, the one who is ranked the lowest is automatically eliminated. Xenia and Sharon are excluded from the rankings, but are able to submit their own rank of the other players.

Nacho is ranked highest.
Peyton is 2nd
Alina is 3rd
AK is 4th
Vixen is 5th

Tyler is last, and he has to face the punishment. Athena approaches him and studies him carefully, before pulling out a dagger and stabbing him several times in the heart. He collapses to the floor and bleeds to death.


EPISODE SIX
Athena rewards Nacho for getting first, and grants him temporary protection. She then returns to Olympus. Artemis explains that the source of monsters on the island is coming from a secluded cave, but it requires a group effort to remove a boulder that is in the entrance. Everyone mves the boulder and they hesitantly enter the cave. Apollo enters the cave eagerly, and then a flash of purple and blue light engulfs the cave. Apollo is engaged in a fight with Hermes. Before Artemis can help her brother, flames surround both Hermes and Apollo, burning them to a crisp.

Coming out from the shadows is the god of fire, Hephaestus. Hephaestus smirks. Artemis asks what he was doing, and Hephaestus reveals his reasoning. He says that his whole life he thought Zeus and Hera were his parents, but his father was actually Hades. He vowed revenge on Olympus, by teaming up with Hermes and his father to unleash monsters on the island, to eventually use to storm Olympus with. But Hermes and Hades got carried away and wanted to have human sacrifices. He says he is glad Hades is finally ruler of Olympus.

Vixen and AK were selected by vote. They head to the underworld with Hephaestus. Hades doesn't trust them, and orders Cerberus to eat Vixen alive. AK is uncomfortable, but is escorted into a dining room. Hades is about to say something, but Hephaestus cuts him off and shoots a ball of flame, melting Hades' head into the plate.

Hephaestus grabs a wine bottle and heavily drink it. He begins vomitting and face plants into his plate. Persephone and Dionysius enter the room. "Never could resist the wine could you Hephaestus? Father like son" Persephone laughs at Hephaestus' dead body. Dionysius grabs AK and they leave the underworld.


EPISODE SEVEN
Everyone is worried when nobody returns. They are visited by Athena, this time she brings Ares. They inform the players that Vixen, Hades and Hephaestus are dead. Artemis, Ares, Athena, Dionysius and Persephone are the only main deity's alive, and Dionysius and Persephone are ready to destroy Olympus. The 6 players much split into 2 groups. 3 to go to Olympus, and 3 to go to Dionysius' palace.

Artemis shows Peyton, AK and Sharon to Dionysius' palace. Peyton slaughters Persephone, but AK and Artemis are killed by Persephone's guards. Sharon and Peyton make it out alive.

Ares and Athena show Alina, Nacho and Xenia to Olympus, Alina slaughters Dionysius', but Nacho is killed by Dionysius' guards. Alina and Xenia are joined by Sharon and Peyton.


EPISODE EIGHT
Athena and Ares reveal that Dionysius' removed Olympus' protection, and their are 4 torches that need to be lit up to protect Olympus. Athena and Ares head to two of them, and 2 people need to be selected by vote to light the other 2 torches. Sharon and Peyton are selected.

Sharon and Peyton successfully light their torch, but monsters have entered into Olympus and they need to be killed. Athena, Ares and Sharon die trying to kill the monsters. Peyton, Xenia and Alina are approached by a counsel of minor deities. They reveal that 2 of them must become the new rulers of Olympus. They will be decided by the counsel (the public), their deceased friends (jury), a physical challenge (Arrow Jump), a mental challenge (a quiz) and a torture challenge (300 piece rotating puzzle).


ATTENTION PUBLIC!
Now, public, this is where you come in. You've got to read over the summary, and the pleas posted by the finalists, and then rank the finalists in order you want them to win. Votes due 11ZT, October 5.

Send them to my Zwooper PMs, or discord PMs (ArcturusDean #4616). All people that submit will be entered into a prize draw, where the 2 winners will win 100 chips in gifts, each! 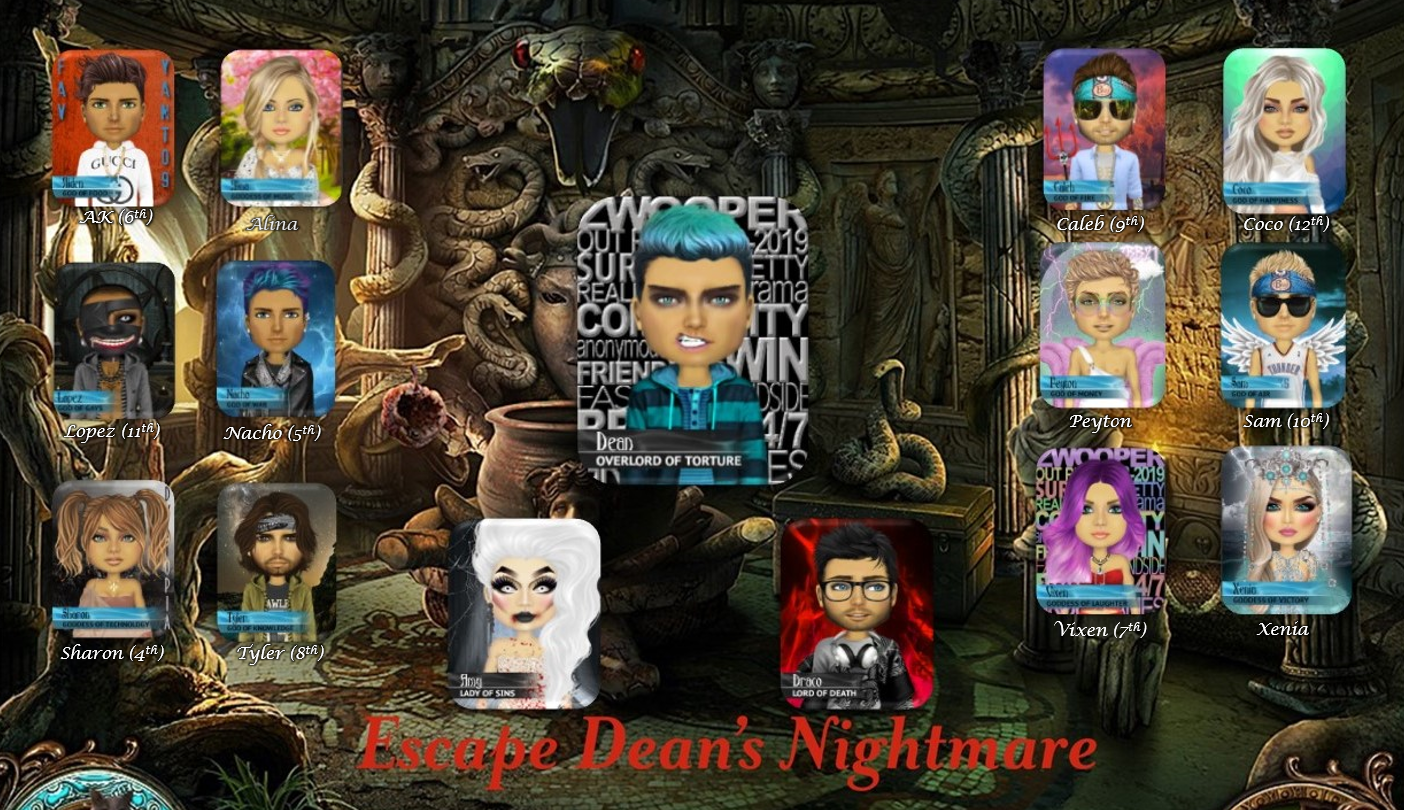 Chart: thanks to @Peyton for is legendary charting skills! 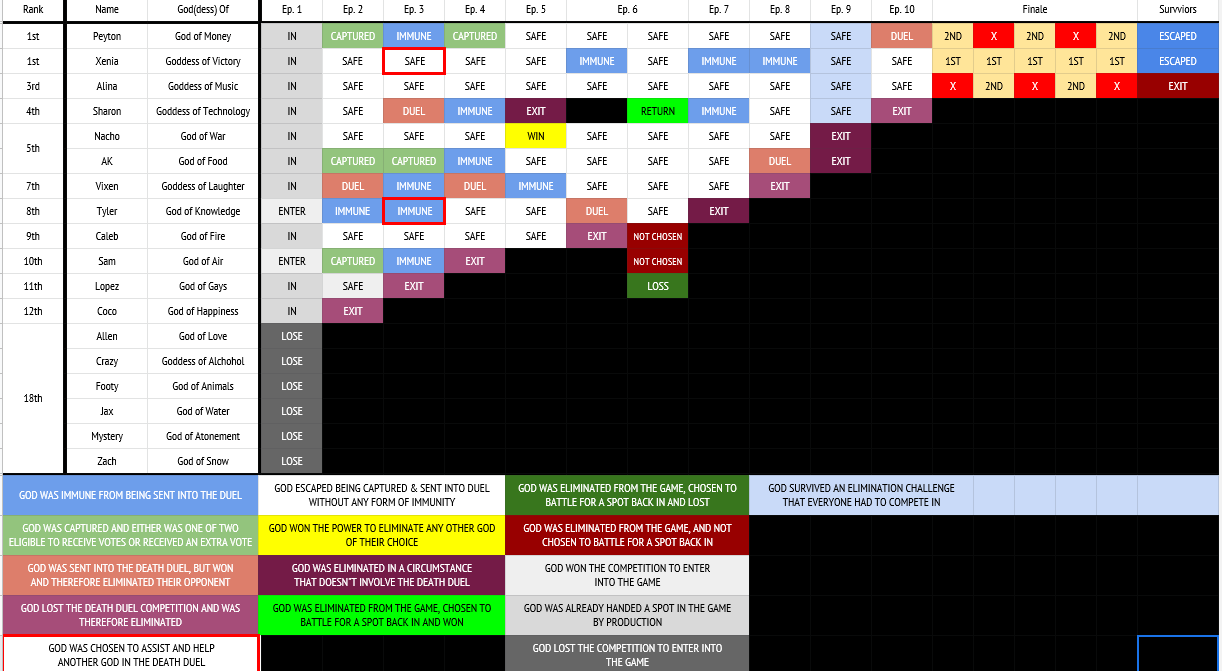 Linking my plea for anyone who would like to make an informed decision with their valuable vote. I have worked very hard to make it to the end while equally balancing all aspects of what was a game with an unique & unpredictable format. Any and all support will be much appreciated. Thank you : )
on October 04, 2019 15:01   Dean
@Typo it's one of 5 parts to the finale. The idea is for the finalists to sell their story in the form of pleas, not have me sell their game for them :) and it's because of that said major that I haven't had time to post episodes.
on October 04, 2019 14:56   Typo
So we're supposed to vote for a winner based off a season where we saw nothing except a one page summary of the game at the end? That's a terrible design concept for someone who's a design major...
on October 04, 2019 13:00   Dean
Placements: