LITERARY GORE IS INVOLVED IN THIS STORY 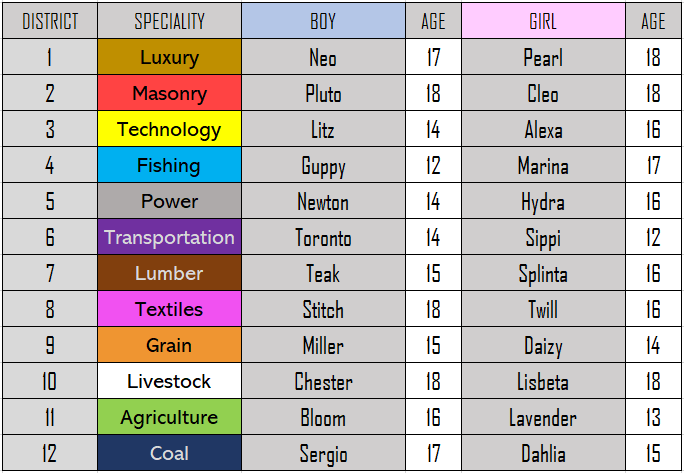 
The 24 tributes had all been waiting in the holding rooms below the Arena for the past hour, each being visited by their mentors with some final words of advice. Lavender (11) was sat in the corner crying when Remi Arlo, Victor of the 2nd Hunger Games and now Mentor to the tributes from District 11 came to say his final words to her. Remi tenderly approached her and embraced her in a final hug, Wishing her luck and telling her that nothing is impossible, if she tried her hardest, she could do this.

Miller (9) was visited by his mentor, Stevie Hughes, Victor of the 1st Hunger Games just as the outfits for this year were brought in. All tributes were to be dressed in a black and white wetsuit with simple black water shoes. Stevie mentioned that the arena is most likely going to be water based with a lot of heat involved considering the texture of the outfit. He wished Miller good luck before he stepped into the tube and it was sealed around him. He gave Stevie a small weak smile and wave before the tube began to rise into the Arena.

This years Arena was known as the Tropical Swampland.
The cornucopia was positioned in the very middle of the Arena with the 24 podiums forming a perfect circle 30m out from the cornucopia structure. The structure itself was positioned high on a platform roughly 12 metres off the ground with 24 ladders directly in front of each podium that tributes would have to climb up to reach the best supplies. In the mouth of the cornucopia lay a large supply of different weapons (Tridents, Bow & Arrows, Swords, Spears, Knives), along with some more useful supplies such as Plenty of food, Rope, Wire, Gallon bottles of water and even a few pairs of Night Vision Goggles.


On the ground before the ladders lay scattered small bottles of water, portions of food, backpacks containing mystery items. The cornucopia field was made up of knee-high dark water that the tributes would have to wade through. On the southern side of the Arena there was a dark swamp scattered with Dead Trees and overcome with fog so that it was hard to see. The rest of the Arena was made up of a beautiful Tropical Jungle, A waterfall to the East of the Arena was the only main source of water but to get the water the tributes would have to be careful as the water was inhabited with small yet vicious piranhas and even some goldfish mutts that were the size of a small dog, made to look harmless but they had big sharp teeth that were just as vicious as the piranhas.


Straight north of the cornucopia a large tropical river went straight to the perimeter with undrinkable contaminated dark green water, although the water itself was not safe to drink there was no harmless animals living there, only some small fish that Tributes could catch and eat if they could figure out how to.

Pearl (1) was positioned directly south of the Arena between Chester (10) & Dahlia (12), she looked around for her district partner but could not see him anywhere. Neo (1) was stood on the exact opposite side of the arena, directly north with Guppy (4) to his left & Hydra (5) to his right. As the countdown began and the Careers all realised, they had been split up equally on every side, they grinned at each other as the countdown started from 30.


As the countdown hit 0 and the gong sounded Pearl (1) immediately sprang into action sprinting straight for the ladder in front of her. She climbed to the top of the ladder just moments after Cleo (2) had reached the supplies. The two girls were the first to reach the top of the platform way before anyone else. Pearl grinned at Cleo, clearly excited the games were finally underway. Cleo grabbed a spear and turned, throwing it straight at Pearl. She collapsed to the floor with a look of pure shock on her face and just as the 2 boys from 1 & 2 were climbing to the top, Cleo pushed Pearl’s body over the edge, and she went tumbling to the bottom.


As Pluto (2) reached the top of the platform he was devastated to see that around 10 tributes had already made it up the top and were fighting over the supplies. He was at first shocked at the carnage that was ensuing but quickly gathered his thoughts and ran inwards. As he saw Neo (1) stabbing Stitch (8) through the chest with a sword he picked up his own weapon, a trident and focused his attention on the nearest tribute to him. He threw the trident and impaled the young girl Sippi (6).


Teak (7) had gathered a small amount of food and one of the backpacks lying on the ground and started climbing to the top of the structure but as he poked his head over the side, Miller (9) appeared right above him and shoved his spear directly down into his skull, as Miller shuddered and Teak’s body went tumbling to the floor, Miller climbed down the structure and sprinted off near the Waterfall to the east of the arena with Daizy (9) following him, she had managed to take a small set of throwing knives and a good amount of food and water for the pair.


Cleo (2) had jumped down to the ground floor with a spear in hand hoping to take out a few of the weaker players who did not dare to climb up to the main platform. She noticed Sergio & Dahlia (12) running to the North-East, fleeing from the carnage each carrying a backpack and decided to leave them and turned to her right where she noticed Twill (8) & Lavender (11) fighting over a backpack. She threw the spear impaling Twill through her neck, as she fell to the floor and blood splattered over Lavender she screamed in shock and tried to wipe the blood from her face. Cleo walked slowly up to the girl and grabbed her by the hair before placing both her hands on the sides of her head and twisted. Lavender’s body went limp and fell directly on top of Twill’s.


Marina (4) had herself a trident along with an abundance of food and water which she had shoved into a backpack along with some wire and rope. As she was getting ready to run from the area, she saw Splinta (7) being decapitated by Neo (1). She turned and started to run from the Cornucopia clearing but stopped suddenly when she noticed Cleo (2) trying to remove her spear from Lavender’s body. Marina did not even hesitate, she pulled back her arm and fired her trident which landed in the back of Cleo, she fell to the floor screaming. Marina ran over and finished Cleo off before removing her trident and running to meetup with Guppy (4) who had hid to the north of the arena as the pair had planned before the games began.


As the pair were running, they noticed Chester & Lisbeta (10) ahead of them and Marina called out, noticing the pair had only a backpack each on them she offered an alliance with her and Guppy, saying that with 4 of them they had a much better chance of taking down the careers. The pair agreed and the four continued on north into the arena following along the river.


Litz & Alexa (3) were the last to leave the cornucopia clearing, They originally started to head to the West of the Arena but noticed Bloom (11) with a sword and a backpack running ahead of them, so they changed their direction and headed South into the Swamp instead. They had managed to grab a backpack each along with one set of throwing knives that contained 4 knives. The pair continued on south into the thick fog of the swamp. They heard screams coming to their left, so they hid themselves down in the water underneath the thick moss coming out of the tree trunks as Toronto (6) came flying past them with Newton & Hydra (5) following him. The pair waited a few minutes before continuing in another direction and as they heard Toronto’s screams suddenly come to a stop Alexa was seen to let out a few tears as the reality of their situation had finally hit her.


The quartet of Marina, Guppy, Chester & Lisbeta (4 & 10) travelled north for the next few hours until they heard 9 Cannons boom out. Chester suggested that they rest, they had travelled far enough now and if anyone tried to attack them, they would most likely outnumber them. Marina & Lisbeta agreed to this and they all sat down. Guppy had not said a word since the start of the games and as he started to cry, Lisbeta comforted him by speaking about her life back in District 10 and why she loved working on the dairy farm as much as she did. Guppy’s mood lightened as he listened intently to Lisbeta.


Chester & Marina both spoke about their lives in their home district and when Chester asked why Marina had let Guppy aline with her she mentioned that Guppy and her families were extremely close and that she would do anything she could to ensure one of them wins the games. Chester had a blank expression on his face during this time and commentator Juliana Kross stated that he did not like that comment and placed her bet that he would be the first to turn within this alliance. But Chester simply said that if anyone were going to win these games it would be someone from this four.


Neo (1) & Pluto (2) were in absolute shock when they noticed both of the girls from their districts had perished during the bloodbath. The pair agreed that they stood a better chance against the rest of the tributes as a pair, and they decided they would spend the night on the cornucopia platform for the night. They spent the night talking about their lives back home and how different it was compared to the Capitol.

No more action ensued for the rest of the night and

At Midnight, the portraits of


Were shown which left 15 tributes remaining. 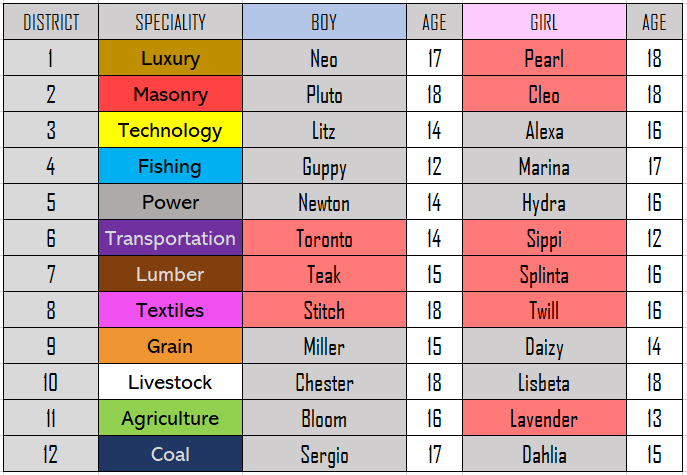 Neo (1) & Pluto (2) positioned at the cornucopia, Neo using a sword, Pluto a trident. Plenty of supplies to last them the duration of the games. The pair each have access to night vision goggles.

Litz & Alexa (3) are south in the swamp with a backpack each and 2 throwing knives each.

Guppy & Marina (4), Chester & Lisbeta (10) are north by the river, they have a trident with Marina but no other weapons, plenty of food and water and 3 backpacks.

Newton & Hydra (5) are south in the swamp with a sword between them and a backpack each with plenty of food and water.

Miller & Daizy (9) are east at the waterfall with one backpack and one spear.

Bloom (11) is west in the jungle with a sword and a backpack with food and water.

Sergio & Dahlia (12) are North East each with a backpack and a small amount of food and water.